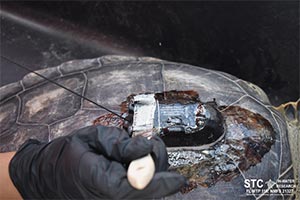 Results: The goal of this study was determining juvenile green turtle seasonal movements in the northern and southern Big Bend. Since over-wintering research on green turtles in this region had not been done before, we deployed six Lotek Argos K2G 276A Dive tags in 2019 and, when those were successfully tracked, another 17 Argos and GPS tags in 2020. We directly attached satellite transmitters to the carapace of juvenile green turtles using NMFS and FWC guidelines. Twenty-two of 23 juvenile green turtles were successfully satellite tagged and tracked over a period of two to nine months (96%). We obtained fall, winter, and spring tracks on the majority of satellite tagged turtles (82%). All turtles that left their original capture site in the late fall-winter, and were successfully tracked into the spring, returned to their original capture site. One green turtle left Florida entirely during the winter and showed up in Cuba, where, after a month of residence there, the tag ceased transmitting. Our attachment method was very successful and there was evidence that it did not have long-term effects on the turtles. This work provides important information for protected species managers on the seasonal migration of green turtles during the winter months.