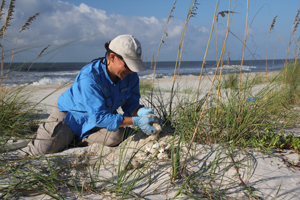 Results: Measure nest temperatures during incubation and temperatures of sand next to nests: During the 2017 nesting season, temperature loggers were installed in twenty-one Loggerhead nests and in adjacent sand control areas on Little St. George Island. This included installation in seven nests during each early, middle, and late nesting season period. For each nesting period, five nests received a single mid-clutch logger and two nests received four temperature loggers spread throughout the clutch area as described in the project proposal. The biggest obstacle to installation was bad weather which caused a shifting of field days and personnel available to assist the project PI. Sea turtles also slowed their nesting activity early this year, causing us to schedule additional field days to complete installation in late season nests. Early season nests: Of seven early season nests, 4/7 had high hatch success rates (80% or higher). Two nests were washed over by Tropical Storm Cindy’s storm surge 6/20-21/2017. One of these nests had a 0% hatch rate and the other had a 28.4% hatch rate. The eggs in the final nest showed no signs of development for unknown reasons. Loggers have been retrieved and data downloaded from all early season nests. Middle season nests: Of seven middle season nests, 5/7 high hatch success rates (80% or higher). The remaining two nests both had 0% hatch success rates. Roots were found in both clutches during hatch success, but the cause(s) of nest failure are uncertain. Loggers have been retrieved and data downloaded from all middle season nests. Late season nests: Of seven late season nests, 2/7 had high hatch success rates (>90%), 2/7 had partial hatch success rates (33% and 55%), and 3/7 had 0% hatch success rates. Due to the chance placement of these nests, they were in areas of the beach with lower elevation so moisture may have impacted the less successful nests. Three loggers were lost from this group of nests due to storm washover, but remaining loggers have been retrieved and data downloaded. To create a complete sand temperature profile: Six transects of temperature loggers consisting of a total of 4-7 temperature loggers, depending on beach width, were deployed at a standardized depth on Little St. George Island from top of primary dune crest to above mean high water line 5/11/2017. With the approach of Tropical Storm Cindy in June 2017, the loggers in position closest to the water at three transects were removed due to throat of being washed away. After the storm the decision was made not to replace these loggers due to continual threat of loss from high tides. A single transect logger and underwater housing was lost to Tropical Storm Cindy. All loggers except those on the primary dune were removed 9/7/2017 in advance of impacts from Hurricane Irma and reinstalled 9/14/2017 after Irma passed. Loggers were removed for the end of the nesting season and in advance of Hurricane Nate 10/6/2017. Preliminary analysis of 2017 data and comparison to 2016 data was conducted.