Summary: The effects of recreational fisheries are rarely considered when managing marine protected species, even though the amount of effort may exceed that of commercial fisheries in some areas. Further, recreational fisheries can have extensive effects, both direct and indirect, upon coastal environments and marine species, especially marine turtles. One such area is the Big Bend of Florida which provides important developmental habitat for several species of marine turtles and supports an extensive open-access recreational scallop fishery each year from late June to late September, a period when favorable water temperatures bring more turtles to the area. Currently, there is no monitoring on the level of effort or spatial extent of the fishery and how it impacts local and regional turtle populations. Therefore, the broad aim of this project is to assess the effects of the recreational bay scallop fishery on marine turtles in the Big Bend of Florida and to inform management practices to better protect these endangered species. To do this the project aims to: 1) define the ecological niche and the temporal and spatial distribution of coastal juvenile turtles within the region, 2) determine the overlap between turtles and the scallop fishery; 3) assess if the associated boating/human activity from the scallop fishery affects turtle behavior; 4) determine the local sociocultural context of fishers and their willingness to change behavior if necessary; and 5) identify effective ways to reduce impacts to turtles and their habitats. 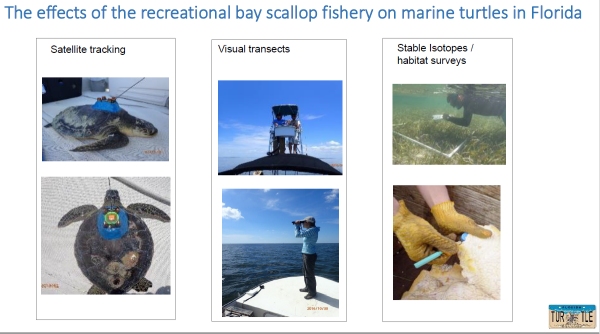 Results: We contracted Inwater Research Group from May 5 – May 13, 2016 and successfully deployed 10 satellite transmitters on juvenile marine turtles (5 on green and 5 on Kemp’s ridley turtles) in the Crystal River area.Turtle 50% utilization distribution home range was determined for before and during the scallop season.A total of 19 trips were conducted for this study (6 prior to the scallop season, 9 during the scallop season and 4 after the scallop season); turtles sightings and turtle transects were conducted in all trips and vessel information was collected during 14 trips. Maps showing the spatial extent and high use areas of boaters and sea turtles during the scallop season were generated as well as turtle home range before and during the scallop season. Completion of 195 interviews with recreational fishers at our study site from June to September 2016. 95% of surveys were conducted face-to-face and 5% through an online survey service. The majority of respondents were females (48%), between 31-50 years of age, and locals (58%). Of these 55% were from Citrus County, with 3% of respondents from out of state. The majority (92%) of respondents were returning visitors, with 84% visiting every year. Of these, 49% spend 3-5 days per month in the water, 28% spend 1-2 days per month, and 10% spend 3-5 days per week. Trips often have one (69%) or two (15.5%) days of duration. Respondents that stay more than one day often stay with friends and family (38%), at hotels (35%), and at rental houses (12%). The majority (95%) of respondents indicated that they knew that the Crystal River/Homosassa area is important for wildlife, identifying the following wildlife as most important: manatees (28.7%), fish (16.7%), dolphins (10%), sea turtles (5.6%), and scallops (4.5%). 68% of respondents indicated that they have seen sea turtles while they are out in the water. Of these, 87% said that their experience is enhanced when they encountered turtles in the water, 3% said their experience is not, and 9% were indifferent. Most (90%) of the respondents indicated that when they see a sea turtle they watch from a distance, 8% ignore it, and 2% approach it. Of these, 64% were aware of protocols and regulations for when a sea turtle is encountered.