Summary: Defining a species mating system is critical to understanding its ecology and enhances our ability of conservation. Marine turtle mating systems vary among species and between nesting populations. In the current study, we propose to use paternity analyses to determine the mating systems of three imperiled marine turtle species (loggerhead, greens and leatherbacks) that nest on three beaches in southern Florida from 2013-2016. Exclusion paternity analysis will be used to determine potential male genotypes in high nesting locations. The resulting male contributions within clutches will assist us in describing the operational sex ratio of each nesting population and their effective population size, to provide a better understanding of the actively mating individuals within these populations nesting in Florida. The results will improve our understanding of mating behavior and how it relates to overall population health. 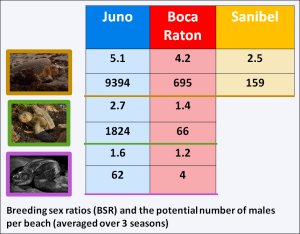