Summary: In our ongoing effort to learn more about adult green turtles, we are proposing to focus on adult male green turtles at the Archie Carr NWR in 2015 for the purpose of collecting basic biological data. These turtles will be encountered when they wash ashore as part of a mating pair or as lone males, if they are found upside down on the beach or in the water. Because 2015 is expected to be a high green turtle nesting season, we believe it will be conducive to encountering mating pairs. In addition to measurements, the proposed three male turtles will be sampled for genetics and stable isotope analysis. The isotopic signatures from these satellite-tracked turtles will be used (along with signatures found in male and female green turtles satellite-tracked in 2013 and 2014) to infer post- nesting migratory destinations for up to 50 non-tracked females to be sampled during the 2015 nesting season. In addition to stable isotope analysis, genetics analysis will indicate whether or not these male turtles are true Florida green turtles. Satellite data will show how long males remain at the nesting beach, the migratory routes used and final destinations at their respective foraging grounds. Areas of special use at the nesting beach will be identified, and kernel home range density estimates will be generated when they return to foraging areas. 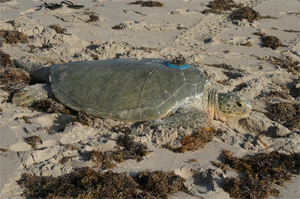 Results: This grant was awarded for the purpose of attaching satellite transmitters to three adult male green turtles encountered in the Archie Carr National Wildlife Refuge at the outset of the green turtle nesting season in 2015. In addition, we had two transmitters remaining from our 2014 grant because we could not find males in that low nesting season (those two transmitters were addressed in the final report for 14-001R). One other transmitter was provided by a local group and will not be discussed here, but it brought the number of transmitters to be deployed to six. Average number of days spent off the nesting beach(es) before beginning their migration was 23 (range 3-36). Two turtles, Boyd and Peter, spent all of their time off the Carr Refuge beach. Jim left the area after just three days and spent the next 39 days off Palm Beach and Broward Counties (after a brief trip to Ft. Lauderdale, he spent all of his time between the beaches of Jupiter and Hobe Sound). Average number of days tracked for these three males was 144 (range 70-232). Average total distance traveled by each of the three turtles while they were satellite-tracked was 1,508 km (range 996-2,387).