Summary: The green turtle (Chelonia mydas) is a long-lived, highly migratory species that habitually exhibits nest and foraging site fidelity in the adult life stage. Reproductively active females exhibit weak connectivity, returning to the same nesting beach from disparate foraging habitats. As adults, their principally herbivorous diet may increase vulnerability to the effects of environmental stochasticity on primary productivity, resulting in higher variability in remigration intervals and reproductive output. In the context of migratory connectivity and habitat selection, these factors may influence female condition and reproductive potential. Females from different foraging areas utilizing the same nesting beach may differ in fecundity. Stable isotope analysis of sampled tissue is a technique used to understand trophic position and geographic foraging distributions. The technique has been successfully applied in a number of marine turtle studies to delineate distinct foraging aggregations from the same nesting beach. Evidence suggests that the portion of the Atlantic green turtle population that nests at the Archie Carr National Wildlife Refuge (ACNWR) rookery is one of the fastest growing globally. Conservation and management data gaps for this rookery include: the number of adult green turtle foraging areas that exist; the contribution of each area to the nesting population; and potential effects of habitat on reproductive output. This study will be the first to use stable isotopes to describe the number of distinct green turtle foraging aggregations that utilize the ACNWR, and inform our understanding of the influence of foraging area selection on reproductive output.Understanding the number and relative contributions of foraging areas will help direct future conservation efforts and prioritization of critical in-water habitat for this endangered species. 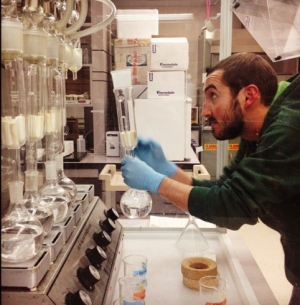 Results: All data collection from nesting females (including morphometrics, tissue sampling, egg data, and nest excavations) is complete, and all samples have been processed at the University of Central Florida (UCF) main campus in Orlando and sent off for stable isotope analysis. In July and August of 2015, satellite transmitters purchased using Sea Turtle License Plate Grant (STLPG) funds were applied to three nesting female green turtles. Unfortunately, transmissions were only received for a brief period of time (range: 35-46 days), and we were not able to successfully track any individuals back to foraging areas. Two of the females stopped transmitting before they left the waters adjacent to the nesting beach. The other began her return migration to a foraging area, but stopped transmitting before she arrived. Although tags purchased (Wildlife Computers SPOT-352B) were designed to reduce the likelihood of antennae loss, this is the most plausible explanation for the end of transmission for these females, cited as an issue in other adult green turtle satellite tagging studies. Sample processing is complete for both skin and eggs in the Physiological Ecology and Bioenergetics Lab (PEBL) at UCF, and 13C, 15N, and 34S values have been produced for all skin and egg samples. Skin results were presented at the 2015 American Fisheries Society Conference in Portland, Oregon, skin and preliminary egg results at the 2016 36th International Sea Turtle Symposium in Lima, Peru, and skin results at the 2016 Joint Meeting of Ichthyologists and Herpetologists in New Orleans, LA. All laboratory supplies necessary for stable isotope analysis sample preparation of both skin and eggs have been purchased. Skin and egg sample analysis for 34S had been hampered significantly due to issues at the isotope lab at Washington State University. Results of analyses for skin were delayed by 2 months due to load time issues with their equipment, and a technician at the facility dropped one of the egg sample trays on the floor, causing all samples within that tray to need to be reweighed and resubmitted. Support for this research project by the STLPG is prominently mentioned on the UCF Marine Turtle Research Group’s (UCFMTRG) website (http://biology.cos.ucf.edu/marineturtleresearchgroup/funding/).