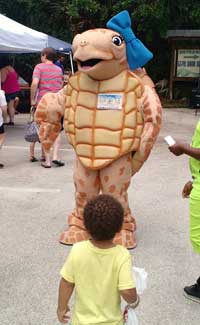 Results: The sea turtle ambassador costume was delivered in early 2016. Costume Specialists was the company which designed and built our ambassador. A final photo of the costume is enclosed. Our character is a female Loggerhead sea turtle with life like characteristics including colors and proportions. She has exaggerated female features including a bow, eyelashes, and light make-up accents. We named her after the scientific name for the Loggerhead, (Caretta caretta) which affectionately we call CC for short. The sea turtle license plate logo is prominently displayed on the front plastron (chest area) in a design element that resembles the look of a name tag. It includes the character name just below the license plate logo. CC has already made multiple appearances at the Marine Science Center including the largest event of the year, Turtle Day, which was held on April 23, 2016. She also was seen at the Florida Marine Turtle Permit Holder meeting in Jacksonville in February. In addition to the character and Prezi, we also created a coloring page that was used at the Turtle Day event. The Prezi presentations have been completed. Both presentations include information such as the basics of sea turtle and coastal wildlife biology, impacts of artificial lighting, best beach use practices (take only pictures, leave only footprints), local regulations, answers to commonly asked questions, and facts about commonly misunderstood information. As a warm-up, the resident and visitor version of the presentation was shown at the Lyonia Environmental Learning Center Wildlife event on Saturday, February 27, 2016.