Summary: The Big Bend area of Florida's Gulf Coast has received relatively little attention from sea turtle researchers, primarily due to the lack of nesting beaches in the region. In recent years, more attention has become focused on developmental habitats, their importance in the life cycle of sea turtles and the need for research and conservation efforts in these habitats. The Big Bend region is characterized by a very large extent of shallow water seagrass and hardbottom habitat that provides appropriate developmental habitat for loggerhead, green, and Kemp's ridley sea turtles. This project will utilize vessel based visual transects and captures of marine turtles in the Big Bend Seagrasses and St. Martins Marsh Aquatic Preserves, which encompass 968,000 acres of sovereign submerged lands and are known to provide habitat for marine turtles. This project will address three main objectives: 1) obtain data on species abundance, size frequencies, location and sex ratios; 2) document the prevalence of fibropapillomatosis (FP); and 3) determine the genetic origin of sea turtles in the Big Bend area of Florida. The project directly addresses needs identified in the recovery plans for marine turtles by identifying important habitats and determining the distribution and abundance status in coastal and marine environments. The information gathered from this research will also help produce a comprehensive set of baseline data for sea turtles foraging in the preserves and aid in the conservation decisions made by preserve mangers. 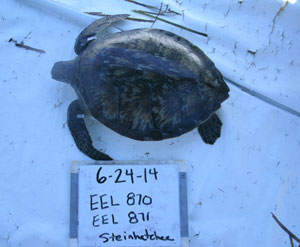 Results: HUNT transect survey results at the BBSAP site were strongly dominated by green turtles at 96% of total observations, with a small number of loggerheads at 1% and Kemp’s ridleys at 3%. This pattern was similar to that observed at the BBSAP in the 2012 work, with the exception of a smaller percentage of Kemp’s ridleys in the observations in 2014. Green turtle abundance ecorded at BBSAP in 2014 of 0.93 green turtles per km compares favorably with that recorded using the same method in other Florida developmental habitats, including the Key West National Wildlife Refuge of 0.30 green turtles per kilometer (IRG, unpublished data) and Palm Beach County nearshore reef habitats at 0.56 green turtles per kilometer (IRG 2011). HUNT transect survey results at the SMMAP site were also dominated by green turtles at 76% of total observations, but Kemp’s ridley turtles had greater representation at the SMMAP site at 24% of total observations. The green turtle abundance recorded at the SMMAP site in 2014 was 1.33 green turtles per kilometer. As was found in the 2012 surveys, both green turtle abundance and total abundance were higher at the SMMAP site than at the BBSAP site. Overall abundance at both sites increased between the first year of HUNTs (2012) and the second year (2013 – SMMAP, 2014 – BBSAP). The first year of HUNTs was part of a pilot study that covered a larger area of the study locations to identify areas preferred by sea turtles. The second year of research then focused primarily on the preferred areas identified during the pilot study. Both the BBSAP and the SMMAP represent outstanding candidates for long term monitoring of in-water population trends. Both sites are logistically accessible and have relatively high abundances of early life stages present. Additionally, these sites are among the closest areas of appropriate habitat for turtles recruiting from the pelagic habitats of the Gulf of Mexico that were impacted by the Deepwater Horizon oil spill. Continued and more extensive monitoring may be able to reveal gaps in the size class distributions that are consistent with reductions in the supply of recruits available in the year class of 2010, when pelagic stage turtles may have been impacted by the spill.