Summary: The goal of this project is to quantify the fine-scale activities, behavior, and relative energy expenditure of juvenile green sea turtles for the first time, using novel acceleration data loggers (ADLs). These devices use the same technology found in the iPhone or Nintendo Wii to measure turtle swimming movements, body posture, and energy expenditure on a second by second basis. ADLs provide a means for assessing turtle behavior at a much finer scale than dive data alone because they record the animal?s body posture and flipperbeat activity. We therefore no longer have to infer what an animal is physically doing during a dive, but can test for it empirically by assessing its body movements and orientation. Despite their power as a research tool, ADLs collect too much data to be transmitted and must therefore be recovered from the animals to access the data. So far this has limited their application to adult female turtles during the inter-nesting period, but we have shown an extremely high recapture rate in the Dry Tortugas juvenile green turtle population and have obtained preliminary ADL data from these animals. This project thus represents a unique combination of cutting-edge technology and an ideal study site and species upon which to apply it. Applying ADLs to this population will allow us to characterize fine-scale behavior of juvenile green turtles for the first time to shed light on this crucial but little-studied life stage. 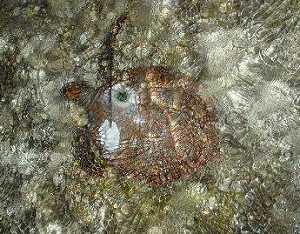 Results: We reached our target sample size of 10-15 turtles having tagged 12 turtles and subsequently recovering 11 tags. Tags stayed attached for an average of 73 hours (41-118 hours). During the approximately 800 hours of collected data we recorded over 13,000 dives. Individual dives ranged from 31 seconds to over 49 minutes in duration. ADLs produce large quantities of data from which a myriad of behavioral observations can be quantified. Initial analyses of depth data showed that there were significant differences in the average depth between turtles (ANOVA, F=93.26, p<0.001). When further analyzed, depth behavior falls into one of three categories, deep divers (avg depth > 5m), intermediate divers (avg depth 2-5m) and shallow divers (avg depth < 2m).