Summary: Sea turtles possess temperature-dependent sex determination (TSD) which has significant implications for their conservation and biology. With previous funding from the Florida Sea Turtle Grants Program we have developed an extensive collaborative network for the simultaneous evaluation of beach temperatures (using data loggers buried at nest depth) on twenty-one loggerhead nesting beaches throughout Florida. This collaborative network has allowed us to generate a beach temperature database that is revealing specific trends. The proposed research during 2009 will address specific hypotheses that are targeting the most obvious threats regarding temperature-dependent sex determination in the loggerhead. Hypothesis 1: We propose that many loggerhead nesting beaches in Florida appear to have temperatures that are near the upper limit in the transitional range of temperature for this species’ sex determination. Hypothesis 2: We propose that beach nourishment projects may shift nesting beach temperatures by altering beach sand type and topography. Hypothesis 3: We propose that some minor nesting beaches such as those in the Florida panhandle may produce significantly higher proportion of males in comparison to Atlantic beaches. 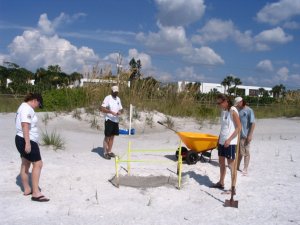 Results: This research sponsored by the Sea Turtle Grants Program provided the foundation for a multi-year project investigating beach temperatures that were simultaneously recorded at nest depth on a wide range of nesting beaches used by loggerhead sea turtles in Florida and in the Southeastern U.S. The results were combined with previous data to provide six continuous years of temperature data collection (2004-2009). The results indicate that temperatures vary significantly between loggerhead nesting beaches. The results also indicate that the spectrum of beaches used by the loggerhead population in the southeastern U.S. include a wide variety of thermal profiles, with potential sex ratios ranging from high female biases to male biases depending on the specific beach. In general, nesting beaches temperatures along the Atlantic coast of Florida (e.g. Melbourne Beach, Juno Beach, Hutchinson Island), where the majority of nesting occurs, were relatively warm suggesting the production of female-biased sex ratios. The histology-based hatchling sex ratio data support the hypothesis that female biases may often be produced on nesting beaches on the Atlantic coast of Florida. In contrast, a few locations (e.g. Cape San Blas on the Florida panhandle) were consistently cooler suggesting the production of a greater proportion of males. However, these locations represented minor nesting beaches compared to those on the Atlantic coast. These finding are consistent with the hypothesis that sex ratio production is beach-specific, but the loggerhead population in the southeastern U.S. is producing an overall female-biased sex ratio. The results provide a basis for suggesting which beaches in the southeastern U.S. are important for the production of female and male loggerheads. The results also indicate that factors associated with beach nourishment projects such as sand type, can significantly influence beach temperature, and thus hatchlings sex ratios. Finally, the results represent a foundation for a temperature database for evaluating potential long-term changes in beach temperatures associated with global climate change. The data indicate that many of the most important nesting beaches for loggerheads are already relatively warm and may be producing strong female biases, thus having little leeway for potential temperatures increases in future years.