Summary: This study will try to determine clutch frequency of loggerheads at the two primary nesting beaches for loggerheads in the Gulf of Mexico. Satellite tags as well as standard Inconel flipper tags and PIT tags will be attached to nesting female loggerheads at either Casey Key or Manasota Key during May. Females will be tracked through the remainder of the nesting season to determine clutch frequency and site fidelity. Other valuable research byproducts related to conservation will be the determination of internesting movement, exposures levels to red tide, and other risks faced during the internesting and post-nesting movements. Pilot studies in 2005 and 2006 have previously determined the feasibility and logistics of such a study but were geared to tagging later in the season. By deploying tags early in May, a more accurate determination of clutch frequency will be obtained. These results would be comparable for other beaches in Florida, but are ideally suited to beaches that also conduct simultaneous night time tag patrols, such as on Manasota and Casey. 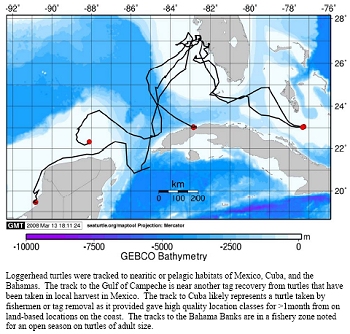 Results: Preliminary results were compiled from females tracked in 2006 (n = 2) and 2007 (n = 15). The observed clutch frequency (OCF) recorded by nocturnal tagging patrols averaged 1.94 nests per season (range 1-6). The clutch frequency currently used in recently completed 5 year review of the loggerhead turtle was 4.1 nests per female (USFWS 2007). However, the OCF was substantially lower than clutch frequency verified in the present study by satellite tracking (mean = 5.23 nests, or 89 nests made by 17 turtles, range 4-7 nests per female). The results from this study suggest that current clutch frequencies used by strategic recovery plans for annual female loggerhead population (65,460 nests per annum) were overestimated by 21.8%. The results obtained for clutch frequency in the present study would change a current estimate of 15,966 loggerhead females (65,460 nests ÷ 4.1nests per female) to a revised estimate of 12,516 females (65,460 nests ÷ 5.23 nests per female). The site fidelity among females varied substantially, from high site fidelity (6 nests within 2.4 km) to more vagrant behavior (4 nests across 109 km) that would be unobserved outside the patrol region. The unsurprising conclusions are that current estimates of loggerhead fecundity are likely underestimated from incomplete coverage or intra-season movement away from a primary study area. The implications of these findings are relevant at several levels. For coastal zones with continuous stretches of suitable nesting habitat, turtles may be less constrained to pockets of available nesting habitat and so less simple to survey. Satellite tagging in conjunction with strategic nocturnal tagging efforts can refine population estimates based on clutch frequency. Satellite tracks from these animals were included for analyses currently in progress by the Turtle Expert Working Group in September 2007. Abstracts on this study were submitted for the 28th Annual ISTS Symposium on Sea Turtle Biology and Conservation in January 2008 and are expected to be presented at the 11th permit holders meeting of Florida Fish and Wildlife Conservation Commission in February 2008. Manuscripts are in preparation for submission to the peer reviewed literature. (Author: Dr. Tony Tucker)