Summary: Leatherback sea turtles (Dermochelys coriacea) have the lowest development and emergence success of any sea turtle species. In fact, Atlantic populations have an average nest success of only 40%. During 2005 and 2006, we found that straggler and post-hatchling leatherback sea turtles often became infected with opportunistic bacterial organisms while still in the nest and succumbed to systemic infection. Histological examination of the turtles that died revealed concurrent cardiac changes that may have been due to systemic infection but also were reminiscent of changes seen in neonates of other species born to mothers deficient in selenium. Given the increasing concern regarding mercury levels in our oceans and the fact that the body uses selenium to detoxify mercury, our concern is that nesting leatherbacks may potentially be selenium deficient. Therefore, our objective is to measure blood mercury and selenium in leatherback sea turtles to attempt to rule-out selenium deficiency as a negative factor for turtle hatching and emergence from the nest. We further plan to document protein electrophoretic, hematological and biochemical profiles of the nesting females. These latter data will aid in establishing reference ranges in clinically normal adult female leatherbacks for use by diagnosticians and conservation biologists. All data will be made available publicly through peer-reviewed publications, permit reports, and web site posting. 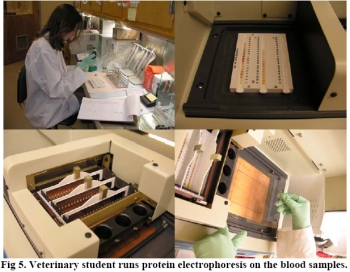 Results: Blood samples were collected from 40 nesting female leatherback sea turtles (Dermochelys coriacea) from April 22 through June 18, 2007 in cooperation with the Loggerhead Marinelife Center. Beaches were patrolled on foot or in conjunction with all-terrain vehicle patrols. Leatherbacks were not approached until egg-laying initiated. Turtles were identified by their rear flipper tags and by internal PIT tags detected by scanners. Blood was collected from the rete mirabile of a rear leg once five or more eggs were laid and collection ceased when a complete sample was obtained or egg-laying terminated (ca. 7 to 11 minutes). Blood samples were analyzed for mercury, selenium, protein electrophoresis, hematological and biochemical values. All nesting female samples were tested and analyzed. We found that our results for mercury (range 1-76 ppb; mean = 20.51 ± 2.37 ppb) are similar to those for Kemp's ridleys from the Gulf of Mexico (range 0.50 – 67.3 ppb; Kenyon et al., 2001), but lower than those from leatherbacks off the coast of Africa (range 100-400 ppb; Deem et al., 2006). Selenium results (range: 0.39 – 19.98 ppm; mean: 7.74 ± 0.81 ppm) are similar to those reported in loggerheads (4.86 +/- 0.85 ppm) from similar geographical ranges (Storelli et al., 1998). Hematological values were comparable to published values identified in two other populations, Gabon and Trinidad, while plasma protein fractions were slightly divergent. Average blood chemistries were most dissimilar from published leatherback values in creatinine, lactate dehydrogenase, amylase, and lipase (differed in an order of magnitude). There was no strong correlation between overall nest success and gross assessment of maternal health. (Author: Dr. Debra Miller)