Summary: The endangered green sea turtle and the threatened loggerhead sea turtle nest on the beaches of Biscayne National Park in South Florida. Sadly, the success of these nesting efforts has been disrupted in recent years by the overwhelming number of predators who forage along these same beaches. During four recent nesting seasons, more than 90 percent of the nests observed within the park had been predated. South Florida residents are largely unaware of this situation. The South Florida National Parks Trust (SFNPT) and Biscayne National Park (BNP) will conduct a collaborative project that will (1) provide more protection for turtle nests in Biscayne National Park and (2) encourage more public involvement in local turtle conservation efforts through education and outreach. Other participants in this project include the Student Conservation Association (SCA), the Ocean Conservancy (TOC), and Miami Dade College. Through this project three SCA interns will be hired to perform nest monitoring and outreach activities. The Project will also cover costs associated with these activities, including materials to mark and protect nests, boat maintenance and fuel and travel for outreach activities. 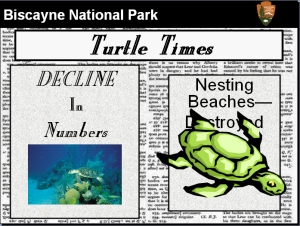 Success of Monitoring Program: Two of the student interns were assigned to monitor park beaches. The additional staff allowed the park to expand the frequency of its monitoring efforts from two times per week in 2005'to - on average - three times per week in 2006 (see attached schedule). The park identified 12 nests in 2006, up from 10 nests in 2004 and 4 nests in 2005. Eleven of the 12 nests were destroyed by raccoons. The Ith nest successfully hatched 62 eggs (see the attached report on the monitoring program.) The students also captured and dispatched 13 raccoons on Elliott Key in an effort to protect nests from predation. Unfortunately, the program did not result in an increase in hatching success. This can be attributed to several factors, including the large number of raccoons on Elliott Key and a delay in the start date of the student interns. The delay in the start date - from June to July - was caused by staff vacancies at Biscayne National Park. One of these two vacancies has been filled; the other will be filled before the 2007 summer nesting season.

Educational Programming and Outreach Efforts: The student interns developed a PowerPoint presentation on sea turtle conservation efforts called Turtle Times. This presentation (included in draft form for review) includes general information on sea turtles, describes conservation efforts in South Florida, the goals of the NESTS program and how individuals can participate in the NESTS program or conservation efforts in general. The students established contact with organizations involved in turtle conservation to learn about current programs (see attached contacts list) and share information about the park's monitoring program, the NESTS program and outreach opportunities. The Miami-Dade College Center for Community Involvement has begun advertising the park's turtle monitoring program on its website as a service learning opportunity for students (see the attached web pages or visit www.mdc.edu/cci ) The advertisement has not attracted any volunteers to date. The park has attended the college's service learning and volunteer fairs in the past, and intends to do so this coming year to recruit for the 2007 nesting season. The students composed a letter describing the park's two sea turtle programs - Sea Turtle Journey (for elementary school children) and Turtle Times (for high school students and adults). Approximately 70 letters were mailed to nature centers, libraries, summer camps and other contacts in Miami-Dade County. The park presented Sea Turtle Journey three times in October as a result of these efforts (total contacts = 93). A student intern presented Sea Turtle Journey to a group of students on October 14 at Concord Branch Library. The presentation introduced students to sea turtles, their natural history and the threats they face in the wild. The students also learned how to identify sea turtles through an activity called Turtle Detective. The park's education staff presented Sea Turtle Journey twice in October (Lakes of the Meadow library on October 4 and Little River Library on October 18) and at Miami-Dade College Environmental Center on November 11. Three presentations are scheduled for 2007. The park also participated in ~wo summer events to educate the public about sea turtles, the park and the NESTS program. A Biscayne National Park booth was set up with activities for children, brochures and sea turtle shells and skulls at the Matheson Marina Flea Market on August 12 (75 contacts) and the South Dade E-Fair and Festival on September 23 (300 contacts).

Future Program Funding: The National Park Service has agreed to provide matching funds for two years for the park's sea turtle conservation program. These funds were used during the 2006 nesting season to augment funding from the Florida sea turtle grant program. Additional money is available for the 2007 nesting season. (Author: Don Finefrock)