Summary: The Florida Aquarium in Tampa received support from the Sea Turtle License Plate Grants Program to create an interactive, multimedia Sea Turtle Exhibit that will educate guests on the life cycle of loggerhead sea turtles and the role the public can play in promoting their recovery by protecting sea turtle nests and nesting sites. The exhibit, situated in the Beaches gallery near a recreated shoreline with live terns and sting rays, will include signage, a nest simulation, a video that depicts nesting and hatching behaviors, a egg shell simulation for young children and a life-sized adult carapace, either a simulation or a real loggerhead carapace. The exhibit will include a variety of features that appeal to and impact different learning styles, ensuring a broad impact for the educational messages. 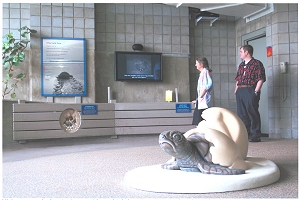 Results: Plans for fabrications were drawn up by fabricators detailing specific features of the nest model and hatchling climb-on. Elevations and details were reviewed and approved by in house Husbandry team and education staff. The scripted video sequence and voiceover was edited by an outside vendor who also provided pro-bono voiceover for the narration. The video editing work included collecting and transferring raw footage into a 4 minute video that was supplemented with several short still clip frames and interpretive messages about the perils and tribulations that the sea turtles face during nesting season. The video was evaluated with visitors using cued questionnaires and time tracking surveys to test the impact the video made on visitors. Based on the results edits were made to improve the flow and content and then a master version was produced. A summary and the results of the surveys are included in the attachment section. (Author: Patti Smith)