Summary: CCC and its project partner, CAVU (Clean Air Visibility Unlimited), will film, edit, produce and distribute a DVD film that raises awareness among Florida residents, the media and decision-makers about how fragile natural coastline of Florida and its associated sea turtle nesting habitat is being impacted by coastal development, erosion, and various beachfront engineering tactics. The idea is to present a compelling, birds-eye view of some of the most important sea turtle nesting beaches in the state (and the country) to show how human activities on the beach are affecting this habitat. Without giving specific recommendations, the production will present the case that Florida and its citizens are faced with choices that will drastically affect the fate of natural beaches. This project will produce a brief (12-15 minute) DVD that raises awareness about these issues and encourages an open discussion about the coastal policy decisions that will shape the future of Florida coastal resources and sea turtle nesting beaches. The DVD will be produced in quantity and distributed to key state legislators, TV stations, and other relevant media outlets, schools and numerous stakeholder groups. 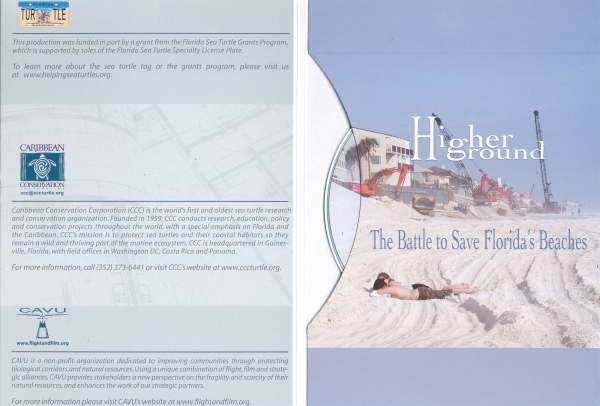 Results: All tasks listed above were accomplished as planned. In August 2006, meetings were held in Gainesville between CCC staff and CA VU staff. Flight plans for filming in November were discussed, potential interviewees were identified, and a draft "story line" was developed. A preliminary short flight over key nesting beaches on the Atlantic coast was conducted. CA VU relied on the video production company Bait and Tackle out of Boston to be the lead video "shooters" and editors. Between November 14 and 20 all flights and interviews were conducted. During 2007 Bait and Tackle staff edited the many hours of video footage and interviews down to a 20 minute final product. Many meetings and discussions were held between Bait and Tackle, CA VU and CCC staff to develop the final content and ensure the quality of the DVD. Due to unforeseen delays in the editing process, the final version of the DVD, "Higher Ground - The Battle to Save Florida's Beaches", was delivered later than expected. Consequently distribution of the DVD has not proceeded on schedule and will begin as soon as copies are made and delivered to CCC. 900 copies of the DVD have been ordered and delivery is expected within 30 days. Distribution to targeted audiences will then begin. As planned, a press release announcing completion of the DVD will accompany the distribution. To order a copy of this DVD, please contact Gary Appelson at gary@cccturtle.org or (352) 373-6441. (Author: Gary Appelson)