Summary: Lake Worth Lagoon (LWL) is a 20 mile long body of water located just west of the Atlantic Ocean along the coast of Palm Beach County, Florida. The lagoon was historically a freshwater lake, but it has been severely altered by human activities since the late 1800s. Today, the LWL is a moderately polluted estuarine waterway that receives ocean water from two man-made inlets. Palm Beach County has extensive monitoring of its high density nesting beaches, yet little is known about the sea turtles utilizing the LWL. The Lake Worth Lagoon Management Plan recommends evaluating sea turtle populations in the lagoon to provide information that will guide lagoon restoration management decisions. This information will also be useful in comparing this population with other inshore Florida populations. Five species of sea turtle have been reported in the lagoon, largely from stranding reports, incidental take from dredges, and anecdotal observations. Sighting data collected during aerial manatee surveys exists, but this information is ancillary and not species specific. This project will collect data primarily by netting which will be augmented by visual observations. The five main objectives of this project are: 1. Obtain baseline data on species abundance, size frequencies and sex ratios; 2. Determine Catch per Unit Effort (CPUE) at specific sites in the LWL; 3. Document the prevalence of fibropapillomatosis (FP), a potentially deadly disease that occurs at a high frequency among sea turtles in Indian River Lagoon and Florida Bay. 4. Obtain blood samples for genetic, sex ratio and disease analysis. 5. Determine habitat preference of sea turtles within the LWL by collecting GPS coordinates of sighting and captures and overlaying this with existing habitat data. 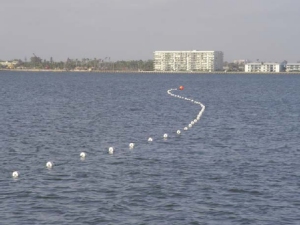 To date, 217 green, 5 loggerhead, and 1 unidentified sea turtles have been sighted during sampling events. The vast majority of sea turtle sightings have occurred in the northern portions of the LWL, especially in the vicinity of Little Munyon Island. This area contains some of the most robust seagrass beds in the LWL and apparently can support the foraging requirements of several green sea turtles.

Overall, FP has been observed in 23 of 40 (58%) captured green sea turtles. The percentage of green sea turtles afflicted with FP has ranged from 0% (March 2005) to 100% (June, September, and December 2006). Due to the small sample size, a true trend in seasonality cannot be drawn, though it appears FP frequency and severity may be more prevalent in the winter; additional sampling events are required to draw more complete conclusions.

As additional sea turtle data is collected in the LWL, ERM continually incorporates it into its permit comments and recommendations to the Lake Worth Lagoon Management Plan (currently under revision). (Author: Paul Davis)