Summary: The Inwater Research Group has been collecting baseline information on marine turtle species in the Key West National Wildlife Refuge and Marquesas Keys for three years. Turtles are captured, examined, tagged, photographed, and sampled (DNA, sex ratio and lavage) for research purposes. Work conducted at the St. Lucie Power Plant and the University of Central Florida has led us to believe that at some time before reaching a certain size, a hormonal or instinctual cue prompts juvenile green turtles to migrate out of east central Florida waters and move on to the next level of developmental habitat or adult foraging grounds. The UCF group has been using satellite telemetry on the largest juvenile green turtles (70+ cm) in their study sites in an effort to learn where those areas might be located. It is extremely rare to capture green turtles larger than 70 cm in Florida, and turtles between 80 and 90 cm are virtually never seen, which is why we are targeting them for this study. Using satellite transmitters, we plan to track the largest size classes (70-90 cm) of endangered green turtles that have been recently found in the Marquesas Keys. Four of four green turtles captured in one day in 2004 were between 70 and 84 cm. Another 16 of these large turtles were sighted in the same area in July 2005 after Hurricane Dennis but water conditions were not conducive to capturing them. We hope to learn more about this stage of their life history as well as possible movements, migration times, routes and destinations. 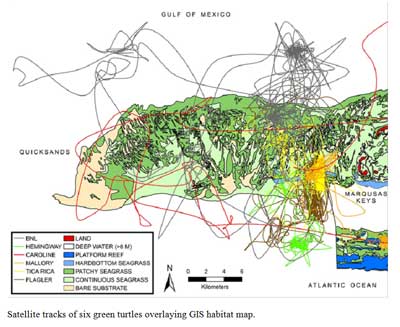 Results: Six green turtles were hand-captured west of the Marquesas Keys and GPS Fast-loc transmitters (Wildlife Computers model MK-10) were deployed on one adult male and one adult female, one large subadult male and one large subadult female, and two smaller subadults of unknown gender. Straight carapace length ranged from 70.4 cm to 101.5 cm, mean was 86.9 cm, SD ± 11.7 cm. When we began this study, we assumed that these turtles would leave the relative exposure of the extensive grass flats to find some sort of cover or protection at night. We examined differences in day vs. night movements. Only one turtle showed any type of day/night pattern. There did not appear to be any difference in depth between the two areas. These satellite data suggest that these green turtles are resident in this area and we consider it a critically important foraging ground for green turtles that nest in Florida (Barbara Schroeder, unpublished data), Costa Rica and Mexico (Bresette et al. 2010). It is interesting that this adult foraging ground also supports large subadult turtles, suggesting that large subadults recruit to adult foraging grounds to complete maturation. Only continued, long term monitoring of this important feeding area will provide insight about these lesser understood size classes in foraging areas.