Summary: Even after decades of study, much remains unknown about the juvenile years of marine turtle life history. In Florida there appears to be a lack of individuals above 70 cm, however adult green turtles are found in the lower Florida Keys. Using satellite telemetry to follow the largest juvenile green turtles as they leave nearshore developmental habitats should provide valuable insight about migration times, routes and destinations that will allow managers to make important conservation and management decisions for this endangered species. Satellite transmitters will be attached to the carapaces of juvenile green turtles of approximately 70 cm or larger inhabiting inshore and nearshore developmental habitats of the east central Florida coast. Satellite technology will allow us learn more about when they leave local waters, their migratory routes and destinations. 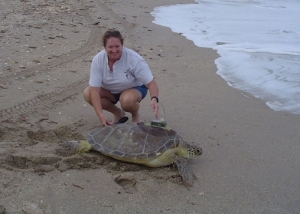 Results: Satellite transmitters were deployed on five immature green turtles with straight carapace lengths of greater than 70 cm as specified in our proposal and permits. Telonics transmitters ST-20, model A-1010were attached to each turtle using several layers of polyester resin and strips of fiberglass fabric. We had no problems with the deployments or the data acquisition. The transmitters sent data from 59 to 292 days. Turtles traveled distances ranging from approximately 1,140 km to 4,171 km. All five turtles traveled to the Florida Keys, but one animal continued on to Cuba and another to Puerto Rico, showing us new routes not previously seen in earlier deployments. It is possible that the turtle with the shortest transmission time may have been captured in the Cuban fishery. Analysis of mitochondrial DNA shows that four of the five turtles were of the A-1 green turtle haplotype found on Florida and Mexican nesting beaches. The fifth turtle had the haplotype A-5, found in Mexico, Aves Island and Surinam. The information provided by this grant added greatly to the data that we have been acquiring, little by little, to better understand green turtle life history and the “missing size classes” of large immature green turtles. Thanks to grants like this, they are beginning to be found. (Author: Dean Bagley)