Summary: The Inwater Research Group has two established marine turtle projects in important developmental habitats in the central and southern part of the state. One project is in the southern portion of the Indian River Lagoon System and the other is in the Key West National Wildlife Refuge. These projects have a proven record of success and generate data on the genetic origins, disease rates, spatial distributions, relative abundances and size distributions of three species of sea turtles found in Florida waters. Critical to the continuation of these projects is the procurement of a reliable research vessel. This proposal focuses on the need for a custom boat, specifically designed for sighting, netting and capturing sea turtles. Boats that had been borrowed previously are either in disrepair or no longer available. Other funding has been sought for these projects, but none addresses the need for a solid research vessel. Funding this proposal will ensure that the collection of data important for the management and conservation of Florida sea turtles continues into the future. 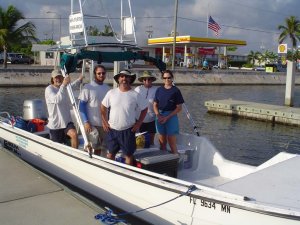 Results: Between July 12 and July 17, 2004 Inwater Research Group Inc. conducted the first of these three sampling trips. Future sampling trips were scheduled for late August, 2004, but were cancelled due to the hurricanes that hit Florida during and around the time. We sighted a total of 151 sea turtles during our six days of surveys in July 2004. These sightings included 68 loggerheads (Caretta caretta), 75 green turtles (Chelonia mydas), seven hawksbills (Eretmochelys imbicata) and one unidentified to species. For the third year in a row, no Kemp's ridleys (Lepidochelys kempii) were sighted. The 2004 sampling produced more loggerhead and green turtle sightings than any sampling period for the previous two years. We believe that the Key West National Wildlife Refuge contains important habitat for at least three species of sea turtles and provides foraging grounds for a wide range of size classes. The boat, purchased in part by STGP funds, will continue to be used as an important sea turtle research tool by the Inwater Research Group for future sampling trips to this important area. (Author: Michael Bresette)