Summary: Loggerhead Marinelife Center (LMC) monitors 15.3 km of coastline for sea turtle activity each year from March 1–October 31. Although LMC beaches account for only 1% of Florida’s surveyed coastline, these areas comprise 10–12%, 12–16%, and 14–16% of the statewide loggerhead, green, and leatherback turtle nesting, respectively. From 2010–2016, LMC beaches saw a 45% increase in crawl counts with a simultaneous 73% decrease in county funding. Researchers on this beach are spending more time in the field than ever before, which puts a strain on old equipment, particularly our all-terrain vehicles (ATVs). Due to the harsh conditions of beach monitoring (e.g., sand, salt water, etc.) these vehicles are breaking down more frequently and becoming hard to replace with the diminished funding. Utilizing an ATV obtained through this grant, LMC will continue to collect data on species, crawl type, GPS points of crawls with sub-meter accuracy, distances from the water line and vegetation line, number of digging attempts, and obstructions encountered for each crawl (over 40,000 crawls were documented during the 2016 season). LMC is providing matching to the grant with the purchase of an additional ATV, a protective Line-X coating for all three ATVs, and the cost of fuel for surveys. 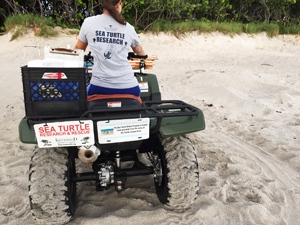 Results: On June 14, 2017 Loggerhead Marinelife Center (LMC) purchased a new Honda TRX420FM1H All-Terrain-Vehicle with the funds provided by the Sea Turtle License Plate Grant. Before use on the beach, the ATV was coated with a protective Line-X coating. A license plate acknowledging the Sea Turtle Grants Program funding for the ATV was affixed to both the front and back of the ATV (photos attached). The ATV was utilized on a daily basis to conduct dawn nesting surveys and night-time tagging studies. The 2017 sea turtle nesting season was record-breaking. A total of 97 leatherback nests, 11 leatherback false crawls, 11,183 loggerhead nests, 19,702 loggerhead false crawls, 7,807 green turtle nests, and 12,499 green turtle false crawls were documented this season. That is a grand total of 51,299 crawls on a 15.3 km stretch of beach (map of crawls attached). A statistically signification number of nests were marked for evaluation for each species. The night-time tagging crew documented 104 different females (27 leatherback, 12 loggerhead, and 65 green turtles) during 127 encounters. Some interesting recaptures included: Four green turtles were originally tagged by UCF; two on their nesting beaches and two in the Indian River Lagoon. The Turtle Hospital in Marathon treated “Brandy” for entanglement and amputated her left front flipper. She was seen nesting twice during the 2017 season. Two loggerheads were originally tagged in Florida Bay as part of an NMFS/FWC reproductive study. One of the loggerheads had a satellite transmitter that had ceased transmitting. Our team was able to recover the tag. A green turtle was originally tagged on a nesting beach in Cayo Largo, Cuba. The turtle nested in Cuba in 2009 and 2013 and was then documented nesting on Juno Beach, FL in 2017. A green turtle was originally tagged on the seagrass beds in Abaco, The Bahamas in July 2004.