Summary: University of Central Florida Marine Turtle Research Group, School of Visual Arts and Design, and Center for Research and Education in Arts, Technology, and Entertainment (CREATE) are collaborating to complete a unique conservation project involving UCF Animation students and 5th graders from the downtown Orlando community, specifically Nap Ford Community School. UCF Animation students and the 5th graders will take field trips to the beach, Mansfield Lab (UCF Marine Turtle Research Group), and the Archie Carr National Wildlife Refuge for observation, videos, photos, lectures, and seminars. The Nap Ford students will form six teams, and using the knowledge they learned about sea turtles and conservation, will develop characters, write, film, and add audio (narration and music) to complete a digital story. The students will present their digital stories to the UCF Animation students, where awards will be given out and a winning story will be chosen to be turned it into a 5-7 minute animated film about sea turtle conservation by the UCF Animation students. 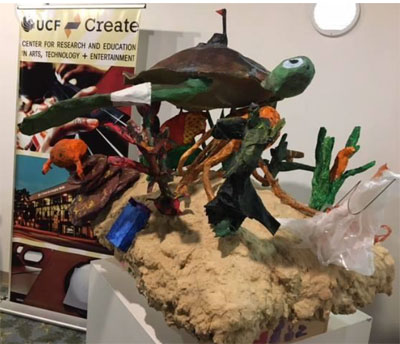 Results: We had a final celebration with the Lake Eola Charter School students, who provided the inspiration for the UCF Character Animation film with their own versions of Sea Turtle conservation stop motion animation films. The students were awarded with medals, and a first place team was named, as well as take-aways. Lake Eola 3rd graders created a Sea Turtle exhibit to promote conservation. The sea turtle is wearing a bandage on his flipper. They have added wire, plastic, and others material to the structure to demonstrate what is a danger to sea turtles and other sea creatures. Sir Bubbles moved from the Orlando Science Center Conservation Exhibit (Otronicon) to UCF’s Gallery 500, in downtown Orlando. Currently, he is located in the lobby of the UCF Center for Emerging Media, and has plans to travel to Lake Eola Charter School and to UCF Marine Turtle Research Group – Archie Carr National Wildlife Refuge. Through the final 6 months of the project, UCF Character Animation students worked diligently on perfecting the Sea Turtle Conservation script, storyboards, and character development. The film was completed in May 2018.